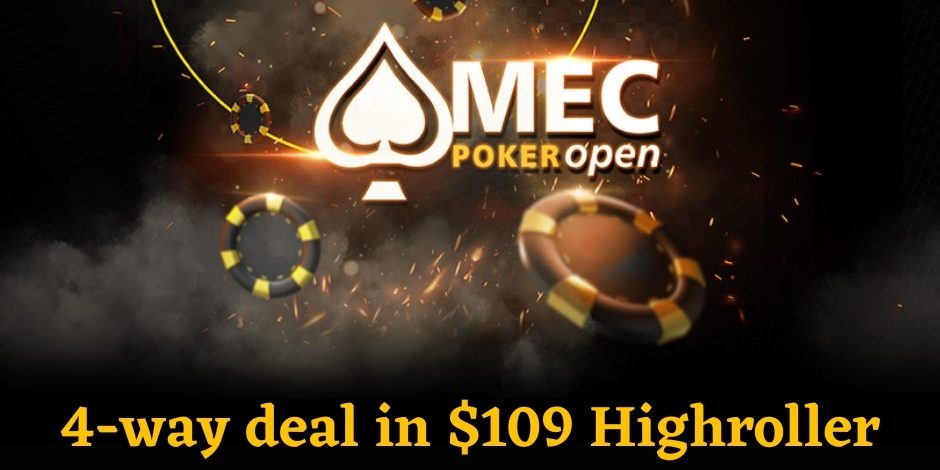 Yesterday the final day of the $109 Highroller was played! There were 34 players who qualified for the final battle, which could be followed via a livestream all evening! Would you like to see the footage again?

All players ITM, 4-way deal at the end

All players who started Day 2 were guaranteed the min-cash worth $188.40. After about 3 hours of play, we were ready for the final table. Here, Calvin Swanenberg in particular distinguished himself. He had accumulated almost 14 million chips by the time he reached the final 4 players.

After a few hands, the remaining 4 players decided to discuss a deal. In the end, this was done after (most likely) using an ICM calculator. This meant that the title went to chip leader Calvin Swanenberg! 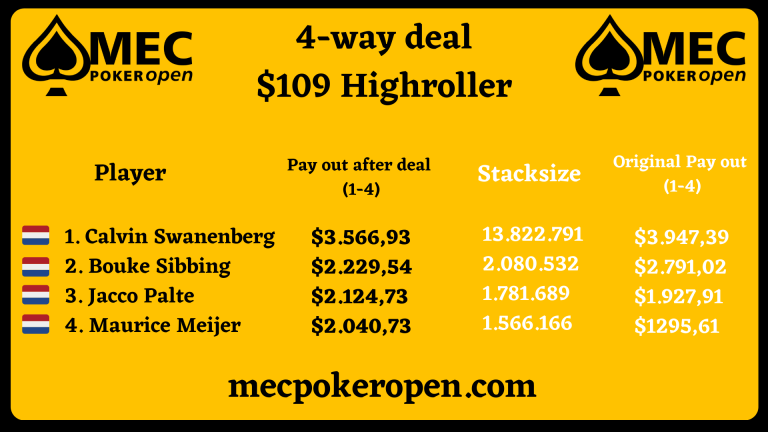 Check out the full result of Day 2

This MEC Poker Open Online was a special edition. We are again very grateful that we were able to organise a pleasant poker experience despite the corona troubles. For this we thank our main sponsor Bwin, but of course also all the players who took part in the event.

We know that most of you would love to play at Casino de Spa again next time. Unfortunately, we cannot guarantee this yet, so we will keep you updated on the next MEC Poker Open via the website and social media.

Whether the next edition will be live or online, put 14-18 October 2021 in your agenda just to be sure 😉 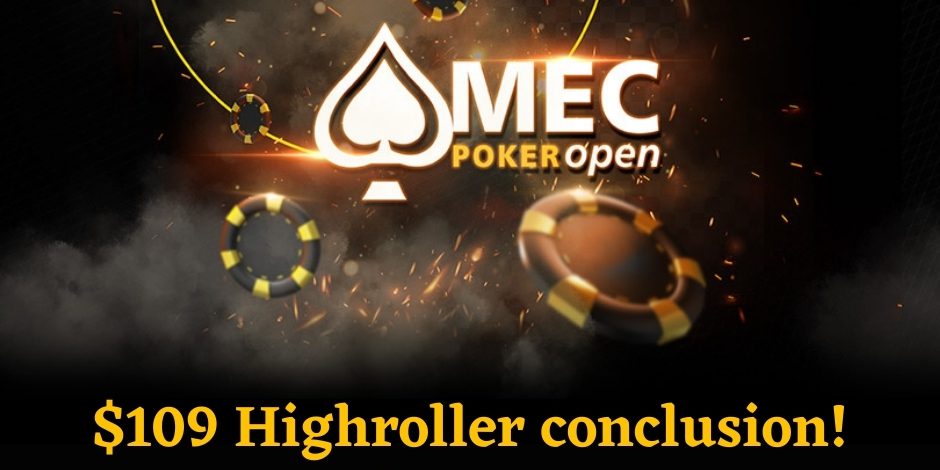 The final starting day of the $109 Highroller of the MEC Poker Open Online was played yesterday. There were 85 entries in Day 1C, bringing the total number of entries for the Highroller to 195 entries. This means that the guaranteed prize pool of $15k was well exceeded, reaching $19,500!

Ronald Tilma finished on top with 1,064,169 chips. He also won the Highroller last time out. Will he prolong his title tonight? He’ll be facing some tough competition, as new Main Event winner

Wouter de Graaf has also qualified for Day 2 with over 1 million in chips.

Jacco Palte had already qualified for Day 2, but he strengthened his position by finishing the day with almost twice as many chips as he had on the previous starting day (578,858). This brings the total number of players for Day 2 to 34 players.

Check out the full result of Day 1C 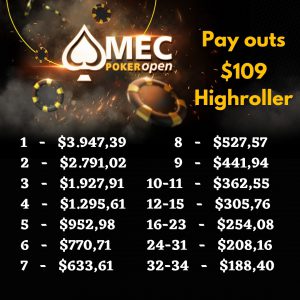 Check out the chipcounts for Day 2

Tonight you can watch the livestream of Day 2 at 18:45! Thanks to a 10-minute delay on the tournament, you will be able to watch the players’ cards, which will make following the game even more fun. The stream will feature expert commentary from Roy van Boven and Milko van Winden. Besides their analyses, they will also have some fun contests with which you can win goodies from Bwin!

You can follow the stream via the button below or via the Twitch channel of Bwin.

$11 Rail Tournament with special (extra) prize for the winner

Want to play a fun tournament while watching the live stream? Play the $11 Rail Tournament ($750 guaranteed prize pool). The winner of this tournament not only wins a nice amount of money but also a nice Bwin poker set. 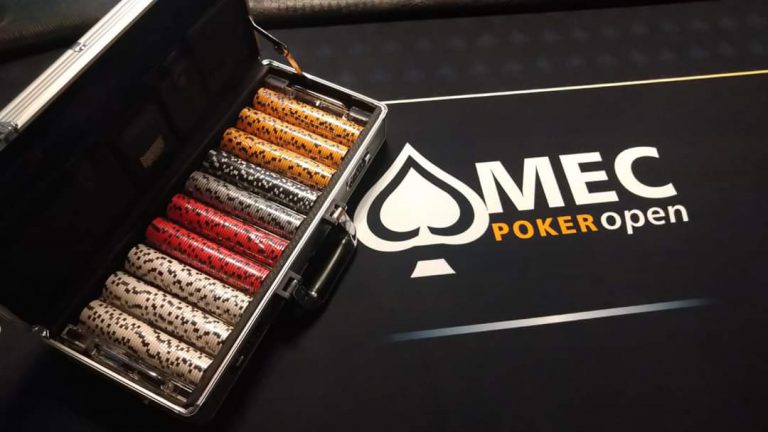 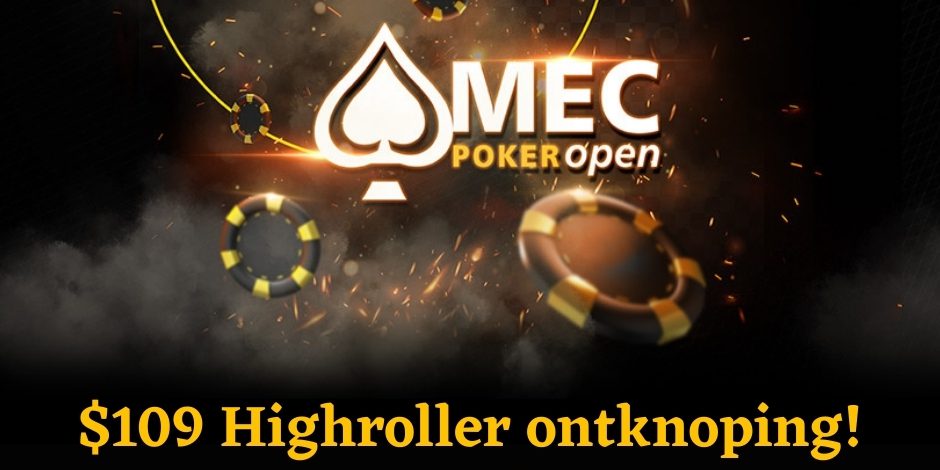 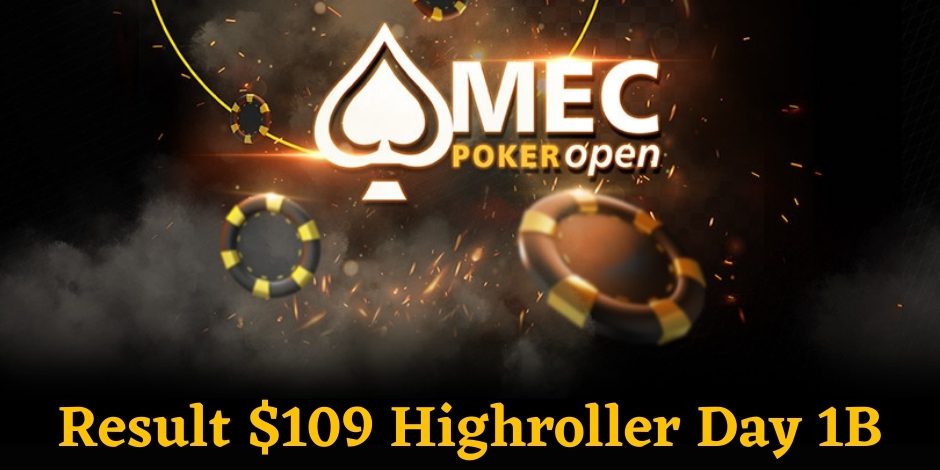 On Saturday April 24th, Day 1B of the $109 Highroller ($15k gtd) of the MEC Poker Open $109 Highroller was scheduled. A $16.50 satellite was played beforehand, allowing 4 players to enter the Highroller at a relatively low price. In total there were 57 entries by 49 players on Day 1B.

At the end of level 18, 9 players remained. They will play on Monday night for the title on Day 2! Among them are 1 Belgian and 8 Dutch players. The chiplead was for

Ryanne van der Wiele with over 1 million chips! Because of this she also takes the provisional chip lead on Day 2. The only Belgian to make it through the starting day was

The average stack for the start of Day 2 is currently exactly 500,000 points, which will be worth about 36 big blinds at that point. This average will obviously change as there is one last starting day to be played tonight at 7pm!

Check out the full result of Day 1B

Tonight at 7pm Day 1C of the $109 Highroller will take place! Blind levels last 15 minutes and you can register until just over 90 minutes after the start (+- 8.35pm).  During that time you can also re-enter 1 if necessary. If you make it to level 18, you are through to Day 2! You can find the tournament in the Bwin lobby when you filter the category ‘MEC Poker Open’.

Curious to see who will eventually win the title? Monday night you can follow the $109 Highroller final day live from 18:45 via the button below or via Bwin’s Twitch channel. 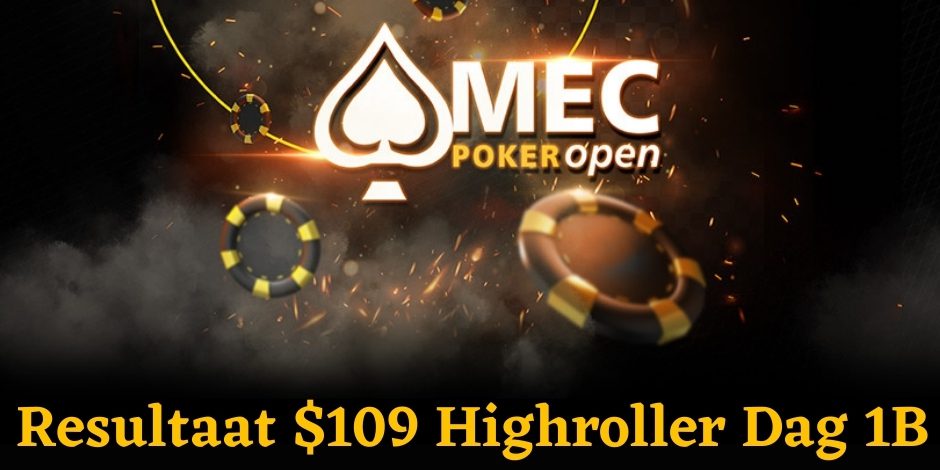 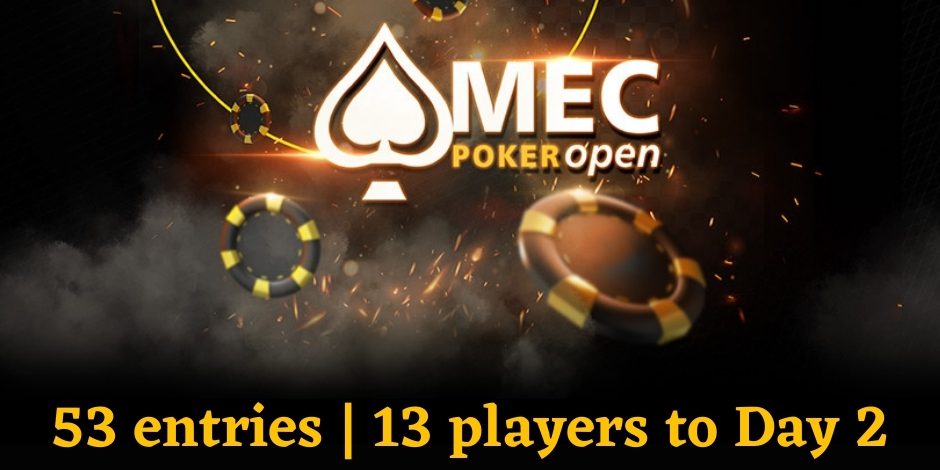 At the end of level 18, 13 players remained. They will play on Monday night for the title on Day 2! Among them are 2 Belgians, 11 Dutch.

Sem Peeters has the chiplead with 674,202 points but

Tijmen Corporaal is close behind with over 6 tons of chips.

The average stack for the start of Day 2 is currently 407,692 which will be worth around 30 big blinds at that point. This average will obviously change as there are still 2 more days to go. The lowest position is currently held by

Check out the full result of Day 1A

Tonight at 7pm Day 1B

Tonight at 7pm Day 1B of the $109 Highroller will take place! Blind levels last 15 minutes and you can register until just over 90 minutes after the start (+- 20.35 hours).  You can also re-enter 1 time during this period if necessary. If you make it to level 18, you are through to Day 2! You can find the tournament in the Bwin lobby when you filter the category ‘MEC Poker Open’.

You can also qualify for the Main Event via a $16.50 satellite just before the start of Day 1B. It starts tonight at 17:00. The satellite can be found in the lobby of Bwin.

Curious to see who will eventually win the title? Monday night you can follow the final day of the $109 Highroller live from 6.45 pm via the button below or via Bwin’s Twitch channel. 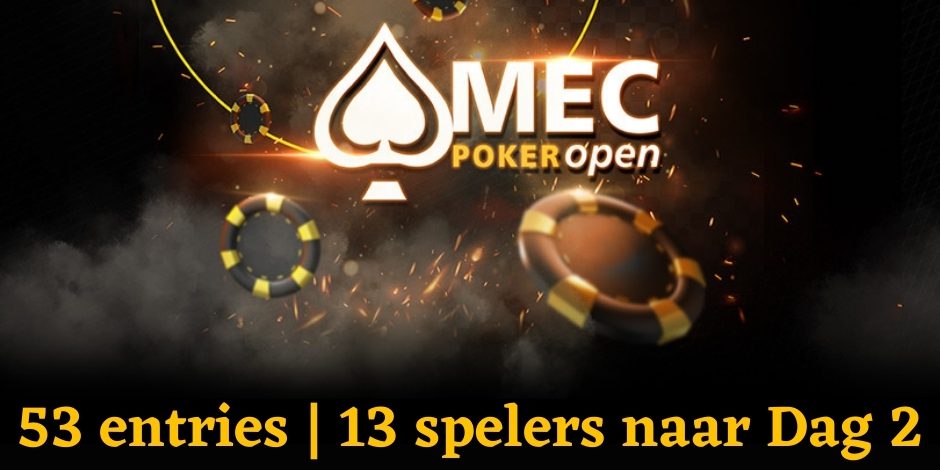 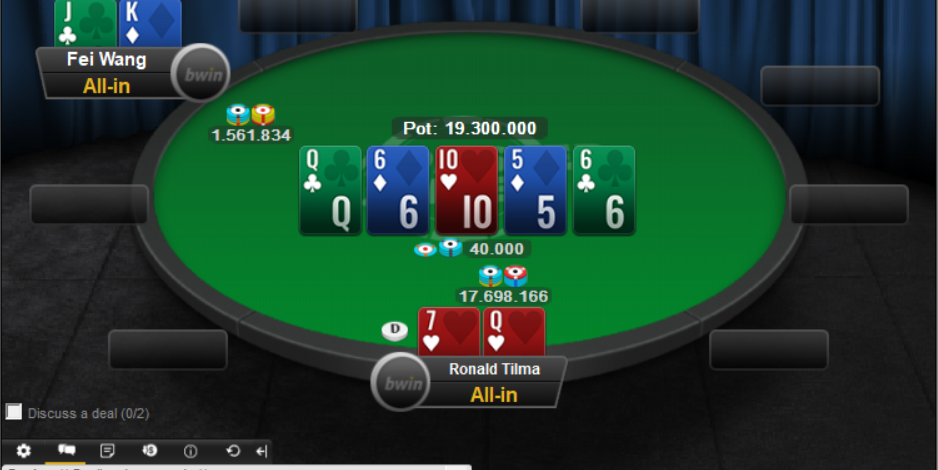 Dutchman Ronald Tilma has become the big winner of the $109 Highroller of the MEC Poker Open Online. After just over 4 hours of playing poker, he beat his fellow dutchmen Fei Wang in a short heads up match. Ronald Tilma dominated the final table and frequently used his large stack to put pressure on the small stacks.  In the end he didn’t get into any more trouble and was able to take down the Highroller title!

Day 2 started with 39 players of which 36 would come into the money.  Apparently nobody wanted to go home with nothing, because it was a very long moneybubble! the shortstacks kept doubling and stayed in the tournament. After just over half an hour the bubble finally burst. Noel Maesen was stranded on the 37th spot and the rest of the players got into the money. After the bubble burst it went fast with the eliminations. Within a short time we lost a lot of players. Also players like Mark Roovers, Julian Hazelhof, Sam Polo Riva and Kris Leppens who started the day in the top 10 lost all their chips soon after reaching the money!

Meanwhile, the chipleader at the beginning of Day 2 Jorn Nicolay was eliminated in 12th place for $320.  Other wellknown players who just didn’t make it are: Jan Snetselaar, Carlo Wolters, Peter Dirks and Maarten Verhaegen. Unfortunately for Andre Oude Allink he was the last player to make it to the final table. In the end he could expect a nice amount of $320 on his account!

Check out the full result of Day 2

The first bustout eventually became old MEC Poker Open champion Domien Deconinck. He made another good run and was able to add $371 to his account. This was followed by the elimination of ‘comeback kid’ Andries van Slooten. Andries always managed to come back with few big blinds and was able to perform well ($443). Unfortunately for the Belgians the curtain fell on the last Belgian Stephane Allard ($578). The 6th place was for Machel Boddeman he added $781 to his account. On the 5th place the Bulgarian audience favourite Metodi Paychev ended. The Bulgarian played an excellent final table and went home with just over $1000. This was followed by the elimination of Mark Aelmans. He started the final table as chipleader but eventually had to settle for a 4th place for $1461.

In the meantime, Ronald was taking all the chips away from his opponents and firmly expanding his chiplead. Ronald used his stack to put maximum pressure on his opponents. In the end it was Fei Wang who eliminated Jeroen van den Berg in 3rd place. His AA remained standing against his opponent’s A10. Jeroen earned $1971 with his nice 3rd place. Ronald Tilma started the heads up with a huge chiplead. After a short heads up Ronald Tilma finally went all in with Q7 of hearts against the KJ of Fei Wang. A Queen on the flop was enough for Ronald and so he was crowned MEC Poker Open Online Highroller champion. Fei Wang had to settle for second place and won $2788. Ronald Tilma won $3840 with his first place!

Could you have missed something anyway? Watch back the live stream from day 2 of the $109 MEC Poker Open Online Highroller here!

At the end of day 1B there were 22 players left. Amongst them are 10 Belgians and 12 Dutch players. The chipleader of day 1B is the Belgian Sam Polo Riva with 1,169,648 chips. The best Dutchman comes on place 2 and is Jan Snetselaar with 1,064,431 chips. Jan Snetselaar who had to leave the Main Event as a bubbleboy, but got a ticket for the Highroller makes good use of that!

Check out the result of Day 1B

Tonight at 7 pm Day 2 of the MEC Poker Open Online Highroller will take place! The remaining 39 players will compete to become MEC Poker Open Online Highroller champion! 36 players will be in the money! A mincash is $154 and for the winner there is a wonderful 1st price of $3840. It’s going to be exciting from the start because only 3 players have to bust before the money is reached!

If you are out of the tournament or feel like opening a second table during the tournament? Then you can go to our private cashgames. Cashgames are hosted all weekend during the MEC Poker Open.

These cash games are only accessible to the community and are therefore a fun way to get in touch with your fellow community members! Would you like to join our private cashgames? Sign up now by clicking on the button below!

Curious as to who will eventually run off with the title? Tonight you can follow the final day of the $109 Highroller live from 6.45 pm via the button below or via Bwin’s Twitch Channel.

Go to the livestream pagina